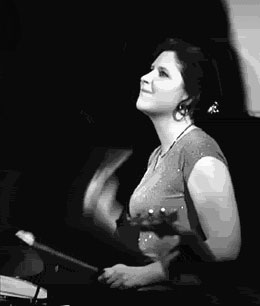 We're feeling a bit sad and insecure, and want to have our family around us. Come with us to visit them.

Welcome to the Linusland Board of Tourism.

Sightseeing in the area? There's plenty to see and hear.

Is there a band in the world more charismatic and welcoming than Le Tigre, flying overhead with their willpower and energy? And look to the horizon: on a clear day you can see Electrelane.

The group you can hear playing in that broken-down little bar is the Magnetic Fields. And if you want to play along... Chat about drumming with Claudia Gonson from the Magnetic Fields, who's over there talking to Maureen Tucker. Hovering around is the ghost of Sterling Morrison, muttering under his breath. Probably came to meet Moe Tucker, too.

There's no place of worship in Linusland (unless you count the Beach Boys shrine in the park), but you'll always find The Hidden Cameras with their perverse religious hymns playing 24 hours a day on the Linus network.

Those statues in the square? Those are some of the people who put up the first buildings on this land. That one's Sister Rosetta Tharpe, Memphis Minnie's in the middle, and Carol Kaye is next to her.

Ann Magnuson's doing some kind of show at the crossroads, and that's the Beta Band driving past in the funny-looking tractor.

The abandoned building there was Club V, but take a look inside anyway, there's still a guided tour and CDs for sale.

The woman harmonising sweetly on the porch with Gillian Welch is Edith Frost. And that's Rita Lynch setting fire to guitars on top of that gas station over there.

There's a whole street of art galleries. See Cornelia Parker's amazing work, and read how she does it. Look at the little-known proto-pop artist Stuart Davis. See more funky little art books at Drawn & Quarterly (Julie Doucet! Seth! Chester Brown!), and Fantagraphics (where you can get Linus cover artist Carol Swain's book Invasion of the Mind-Sappers).

There's a cinema in town, but it only shows Jodorowsky's Santa Sangre all day, every day. Pretend you're Amelie avec Jeunet et Caro- we do!

And that's just what's in our little brochure. Try visiting some other tour guides and travel agents. See the world with Ladyfest. Say hi to the youthclubtapeclub Scooby Doo gang. The Lowsley Sound neighbourhood is where the rockin' Ricky Spontane live.

Something to read on the journey? Try AMP, Disgruntled Housewife or The F-Word. Maybe you've already seen Rockrgrl, Bitch, and Bust. The guys on the soapboxes are Gene Sculatti and Steve Albini. You should go over and see what they have to say. Speaking of reading, you could take the beautiful scenic route through children's book author J Otto Siebold's site, and meet the Bubblesoap band.