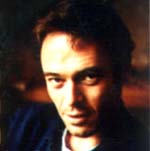 Peter jammed with us for three years and played with Linus proper for a further two, playing on the Linus EP, Some Hearts Paid To Lie, and four tracks from Yougli, before deciding to abandon rock'n'roll and become a scientist. Now, he is a landscape gardener. Naturally.

Big Sean from Wat Tyler played one show with us early in '93 when Peter was away on holiday. (We were so desperate to play that prior to that we even played a show with no drummer at all.)

Finished the album with us. Andy is a nice guy and a very flashy drummer, and never stopped talking and fidgeting.

He joined the Seahorses, and played on their first album.

We've heard that he is now doing very well fronting his own band, Mozer. 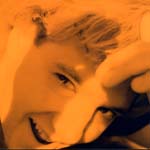 Learned the songs in record time to tour the album, stuck with us for nearly two years, played on the unreleased Supercool EP (and Lift-Off from the Club V compilation CD Rage Against The Scene), and then went back to session drumming for the Enid (honestly!). 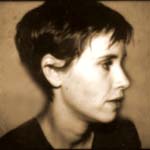 A nervous soul who joined us for a few months. In that era, we wrote a few average songs, recorded a bad demo, and played some uptight gigs.

She was an art teacher, and decided it was too much stress playing one show a month, as well as dealing with her (scary sounding) students. We feel really bad that we can't remember her surname... 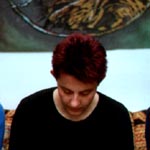 Played with us for two years, appearing on the Don't Forget EP and the 2nd album, until we fell out when she announced she wouldn't be playing the New Year's Eve show we'd been planning for months. Moved back to her native France.

Ex-Voodoo Queens and Gertrude drummer Steffi stepped in for New Year's Eve 1998/99. Yay Steffi! But it was a one-time-only deal. 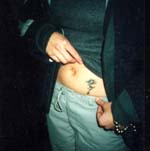 The only stunna to ever play in Linus (says Tammy). Karl Blake referred to her as 'Jodie Foster'.
Kate was a great drummer who played with us for a year. Another teenage wonder, her mum was a performance artist and the late Stiv Bators had been a family friend ("Uncle Stiv"). Kate was young and wanting to rock, so we set her free.

Bemused stand-in who hadn't played for twelve years. Pete is the mini-mogul behind the Bugpowder website and distro.

Linus fan who rehearsed with us for several months during our 'quiet' period. Tony is a classics scholar and IT professional, and now drums with one of the many bands called Burn.

Back to top
The Main Linus
Extended Family
Artists